The brothers Christoffel (1659-1729) and Teodor Lubieniecki (c. 1653-1729) achieved international renown.1 Both studied in Amsterdam around 1675 with Gerard de Lairesse, whose style they absorbed so well that one can identify the foreigners only by their names. Christoffel remained in the Northern Netherlands, where, in addition to portraits, he rendered genre scenes in which the types of Adriaen van Ostade and Richard Brakenburgh have degenerated into caricature [1-2]. Theodor worked at several foreign courts (Tuscany, Hanover, Berlin and Dresden), returning to Poland only in 1706. His portraits (National Museum in Warsaw) resemble the late work of Nicolaes Maes quite closely [3]. With the Lubenieckis we already arrive at the decorative and genre painting of the close of the century. However, we first need to turn back to early pictures of this kind. 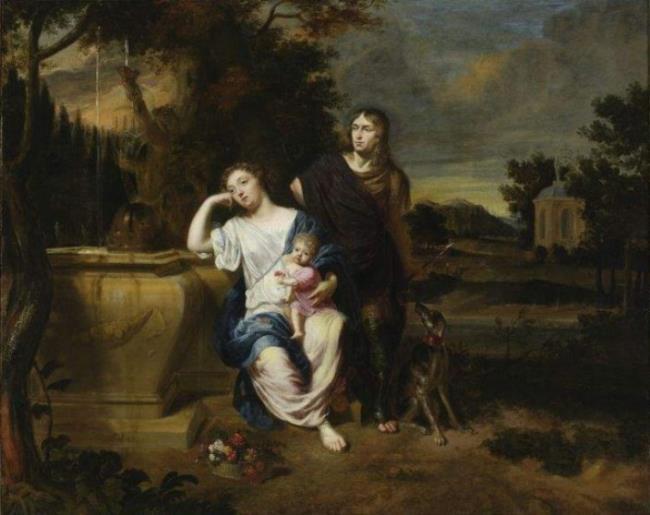 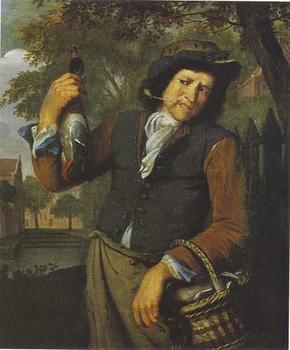 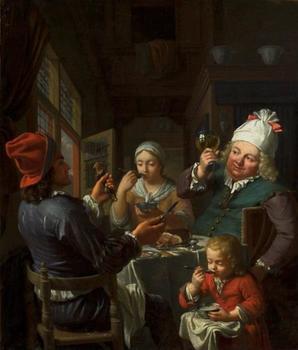 We do not know of a single painting by Pieter Wiggertsz (†1673) of Danzig, who married in Amsterdam in 1644 [1664, ed.], when 32 years old.2 With Laurence Neter (1600/1604-1652) of Elbing (Elbląg), we have only a few pictures and know nothing about his life.3 Like the German painter Godaert Kamper (1613/1614-1679), he painted guardrooms in the manner of Anthonie Palamedesz., whose dates lie somewhere between 1631 and 1649 [4-6]. In all probability Neter learned to paint in the Northern Netherlands.4 Antonie Waterloo (1609-1690) who stopped off in Hamburg, must have continued the journey by ship to have been able to draw in the surroundings of Danzig. The Hamburg Kunsthalle has a View of the Oliva Cloister [7-8], with another prospect of Danzig found in Warsaw’s University Library.5 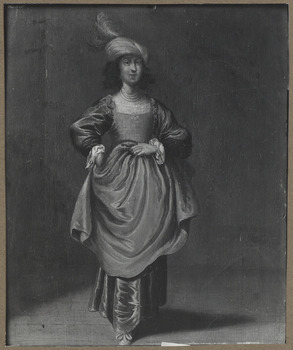 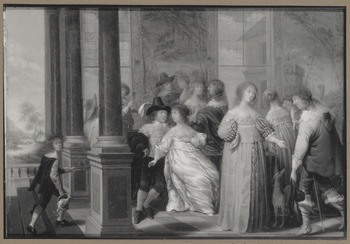 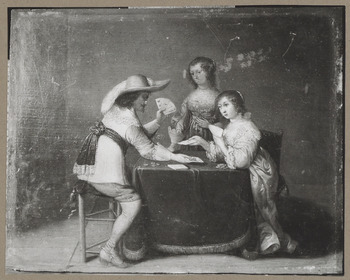 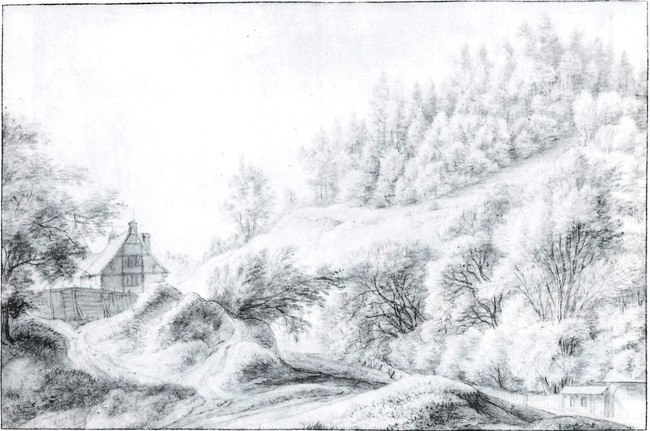 We know from Cornelis de Bie that Adriaen van de Venne (c. 1589-1662) rendered a large painting of the battle of Nieuwpoort for a Polish count [9].6 That ruler may well have been Krzysztof Radziwiłł (1585-1640), who bought pictures by Hendrick ter Brugghen7 and had his ‘effigiem’, which had been painted in Poland, copied by Michiel van Mierevelt and engraved by Willem Jacobsz. Delff [10].8 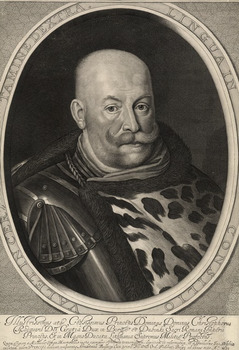 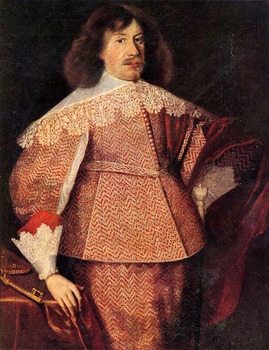 A related ruler, Janusz Radziwiłł (1612-1655) [11], field hetman of Lithuania, was also well-informed about Dutch art and artists.9 In 1651/3 he took on a Rotterdam painter, Abraham van Westerveld (c. 1620-1692), as war artist. This artist, who accompanied his master on his campaign against the Cossacks, drew extensively in Poland, especially military scenes, ruins, foreign villages and the city of Kiev. The original sheets appear to be lost, but copies of the 18th century give us a good idea of his art [12].10 Naturally his principal task was to celebrate the victories of his master. One painting of this series, which was still in the castle of the Radziwiłłs in the 18th century, had come via Russian hands to the Warsaw Royal Castle.11 It depicts the entry of Janusz Radziwiłł into Kiev in 1651 and is a typically Dutch picture (fig. 128) [13]. Westerveld probably returned home via Danzig, where he painted a portrait of Vasile Lupu (1595-1661), which had been engraved by Hondius [14].12 In 1654 Westerveld returned to Rotterdam from his Polish journey. He must have been an enterprising man, who also did not lack for civil courage, since he married five times, the last when in his seventies.13 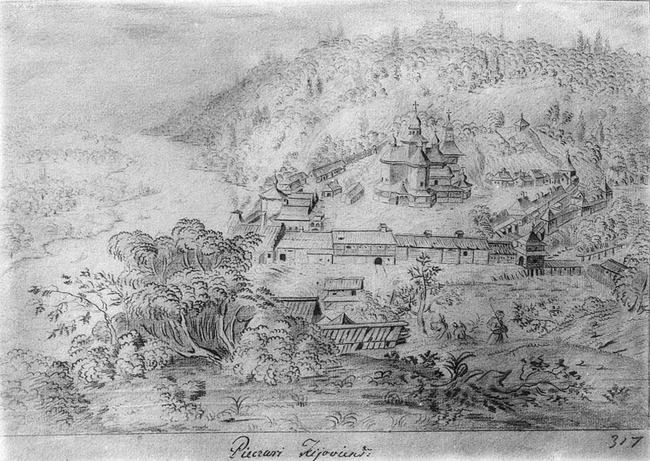 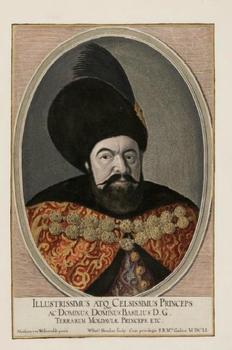 3 [Van Leeuwen 2013] Meanwhile, some facts of his life have been published by K.E. Kandt and J. Tylicki (see RKDartists).

5 [Gerson 1942/1983] Information supplied by K.H. Simon, Berlin. [Van Leeuwen 2013] Unfortunately this drawing has gone missing since 1939 (Sawicka/Sulerzyska 1960, p. 25, no. 79) and has yet to resurface (email Jolanta Talbierska, General Director of the University of Warsaw Library and Director of the Print Room and Historical Collections, to S. Erkens, 12 April 2013).

6 [Gerson 1942/1983] De Bie 1662, p. 234. [Van Leeuwen 2013] M. Royalton-Kisch identified this ‘painting’ with the tapestry by Maximiliaan van der Gucht after a design by Adriaen van de Venne, now in the Koninklijke Musea voor Kunst en Geschiedenis in Brussels. The Polish count mentioned by De Bie was not Krzysztof Radziwiłł, as Gerson suggested, but very probably Seweryn Gołuchowski (email from E. Buijsen to S. Erkens, 18 May 2013). This Polish nobleman came from a wealthy family in Sandomierz and lived in the Netherlands in the 1640’s. He studied in Franeker and Leiden and became standard-bearer of the civic guard in Groningen. It is not known if he ordered this tapestry for himself or as an intermediary. Probably it was a gift for the Prince of Orange, meant to advance Gołuchowski’s military career (Hennel-Bernasikowa 1995, pp. 254-255).

9 [Van Leeuwen 2013] Janusz was actually the son of Krzysztof Radziwiłł. He studied at the University of Leiden in the early 1630s and was an informer to the States General in The Hague about the political situation in Poland. The sitter of a portrait painted by David Bailly in the Muzeum Narodowe we Wrocławiu could be Janusz Radziwiłł (RKDimages 57901).

10 [Van Leeuwen 2013] According to Batowski, the original drawings by Westerveld pertaining to Janusz Radziwiłł's Ukraine campaign of 1649-1651 (c. 100 sheets) were kept in the Radziwiłł castle in Nieśwież (today Belarus) at least until 1792, when the last King of Poland, Stanislaus Augustus, ordered them to be copied by an unknown hand (Batowski 1932). These copies (perished or vanished in 1935, 1939 or 1944/1945), in a much depleted number of 22, were kept in the 1930's in the Print Cabinet of the University of Warsaw. There were also six other copies in two further collections in Poland then, some of them presumably copies after copies. Only one original that Batowski knew has turned up, namely in the All-Ukrainian Historical Museum in Kiev (email J. Tylicki to S. Erkens, 4 August 2013).