4.2 The Uylenburgh Family: Between Amsterdam and Danzig

The drawing book continued to remain in scholarly hibernation even after its digitization, until the summer of 2013, when the current owner mentioned to the present writer that some seven years before he noticed a correspondence between the study of figures by a tree [1] and a Rest on the Flight to Egypt in Amsterdam’s Rijksprentenkabinet [2], which had been attributed to Rombout Uylenburgh (c. 1580/1585-c. 1628) in 2003. The figures and trees of this sheet also show striking similarities to those of the Old and New Testament depictions. A sketch with Diana en Actaeon in Wolfegg, which is inscribed Rombolt van Vllenburg in Danzig [3], is less securely drawn with respect to the mythological scene (possibly as a result of tracing or copying), but the trees and leaves again point to the same hand. The convincing assumption by the private owner of the drawing book that the series of 15 drawings are by Uylenburg or his atelier remained unpublished until today. 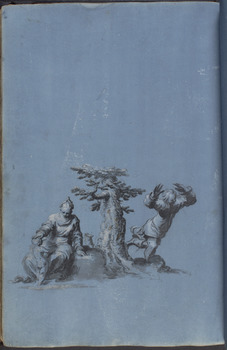 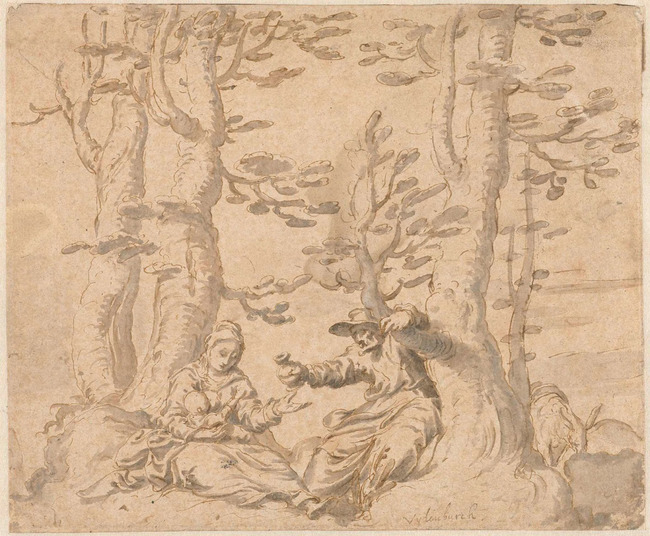 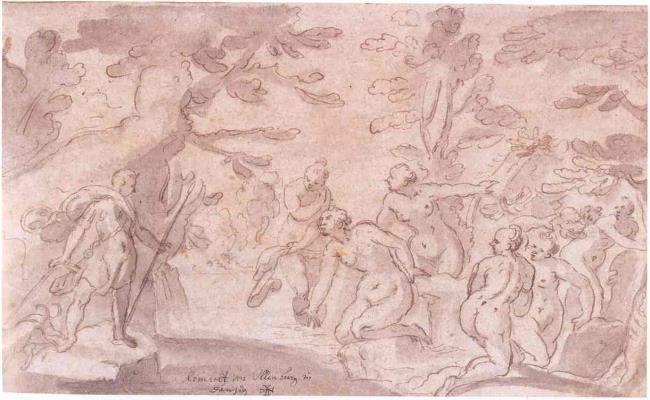 Rombout was a brother of the art dealer Hendrick Uylenburgh (c. 1587-1661), for whom Rembrandt worked in Amsterdam from 1631. In 1634 the famous painter married their cousin Saskia. The Uylenburgh family probably moved from Leeuwarden to Cracow after the birth of Rombout in or shortly before 1585. While Hendrick settled in Amsterdam around 1625, Rombout remained in Poland. He does not appear to have been active as a dealer but, like his father, he became court artist to King Sigismund III (1566-1632) [4]. Despite the contacts that the family maintained with the Dutch Republic, no document recording Rombouts presence there has thus far shown up in any Dutch archive. It is not known who his teachers (presumably in Cracow) were. He cannot have learned his trade from his father, who was a cabinet maker. While Italian influences could be based on German or Southern Netherlandish graphic models, prints after Pre-Rembrandtists were rare at the time and his characteristic foliage and gnarled old trees with their typical washes appear to derive direct from drawings by Abraham Bloemaert or Joachim Wtewael. Rombout may have found his inspiration in local art collections that were all subsequently dispersed but that are known to have been important. However, with five to seven ships setting sail from Danzig for Amsterdam or the other way around on a daily basis at the time, an unrecorded apprenticeship in Amsterdam is also a possibility.1 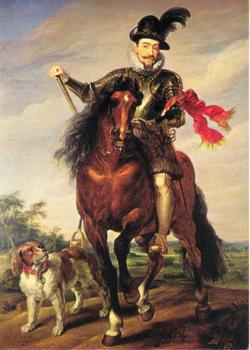 1 I wish to thank Jacek Tylicki, who kindly provided this information. According to Thieme/Becker (1940) a document in the municipal archive in Krakau states that he visited the Netherlands in or before 1628. This is not mentioned in later publications about the artists and needs checking.