Even more closely related to the series in the drawingbook are five until now anonymous grisailles depicting the youth of Christ, located in Ons' Lieve Heer op Solder (Museum Amstelkring) in Amsterdam: The Visitation [1], The Adoration of the Shepherds [2], The Adoration of the Kings [3], The Circumcision [4] and The Twelve-Year-Old Jesus Among the Doctors [5].1 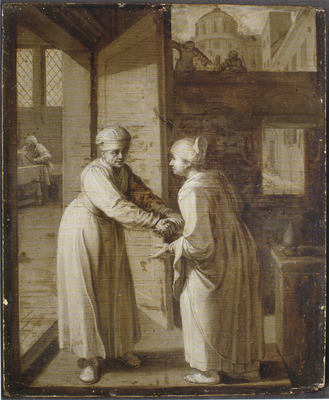 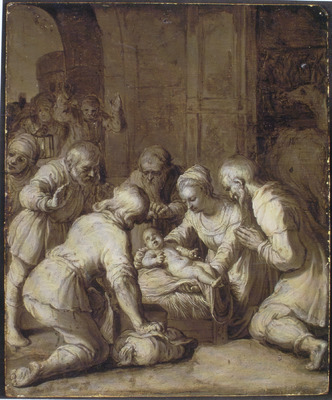 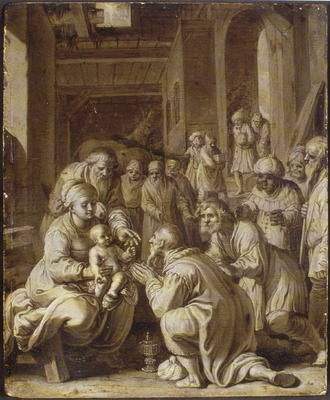 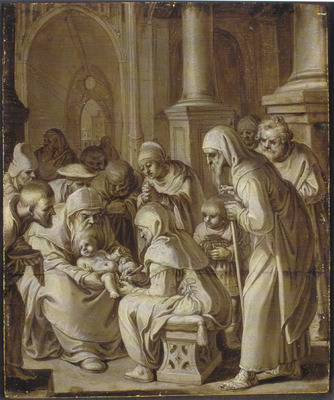 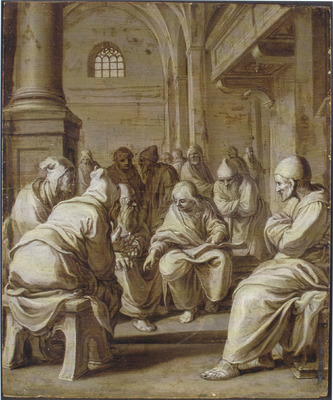 Compare, for instance, the composition and figures of the drawn Adoration of the Shepherds [6] with the version in Amsterdam and with the Adoration of the Kings [1] of the same series, which shows a comparable beam construction and roof opening in the background. There are also demonstrable similarities between the two Visitations [7, 1], such as the half-open door lost in shadow at the top and the garden wall with square opening and arched niche. The tower in the background recurs in the drawing with Elijah and the Prophets of Baal [8]. 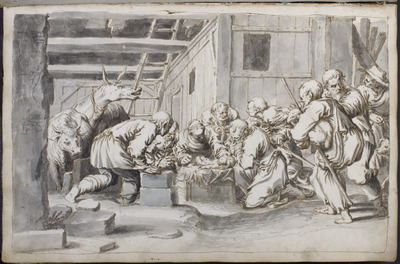 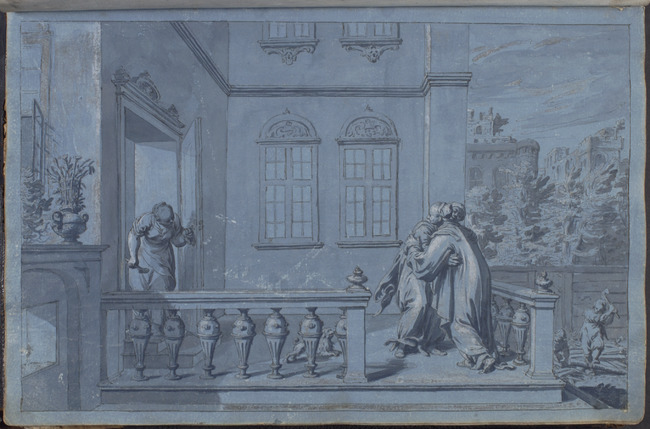 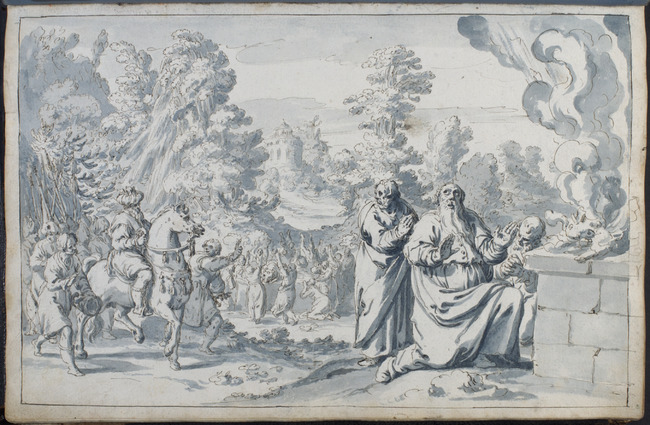 In addition, the five panels feature detailed architectural backgrounds much like those in some of the drawings. The compositions of the pendants in the Rembrandthuis are more Classicistic and the figures have easier poses and better proportioned heads. On stylistic grounds they are therefore dated to around 1620, a decade later than the series in Ons' Lieve Heer op Solder. Possibly the latter group occurs in the aforementioned inventory of 1627. They are precisely ‘half the size’ (de helft cleynder) of the panels in the Rembrandthuis and may therefore have belonged to the mentioned series of eight. These considerations make an attribution of this series to Rombout van Uylenburgh convincing. Edwin Buijsen, Head of Collections at the Mauritshuis, drew our attention to an eighth grisaille, which used to be at the Bonnefantenmuseum in Maastricht and has the Parable of the Rich Man and Poor Lazarus as its subject [9]. Its architecture resembles that of the drawings, including the sheet with the same subject [10] and, even more so, the King David Rebuked by the Prophet Nathan [11]. The divergent figures and a more sketchy technique make an attribution to Rombout himself less convincing, but the work could be a product of his workshop. 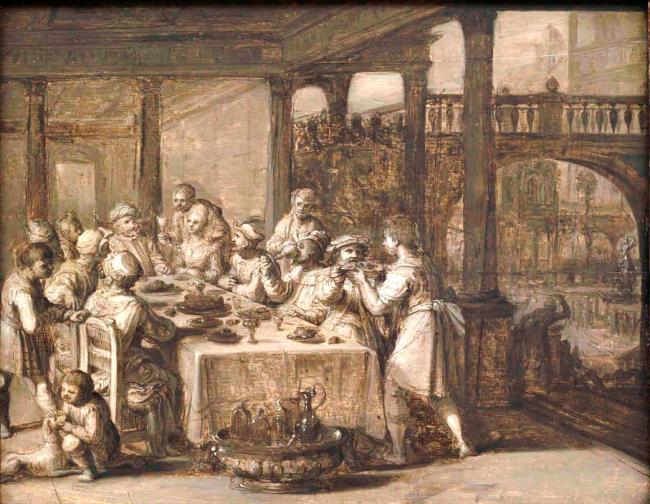 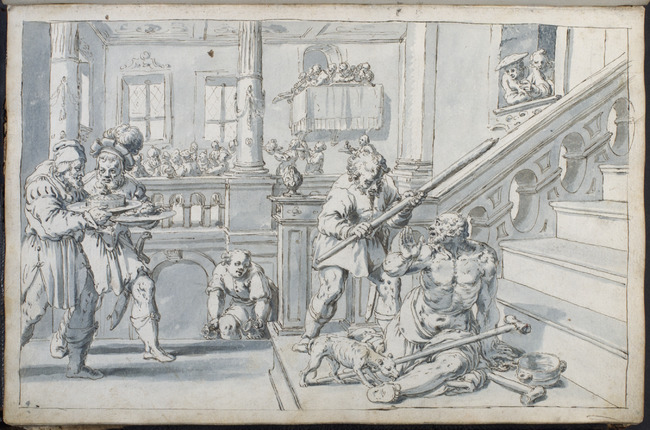 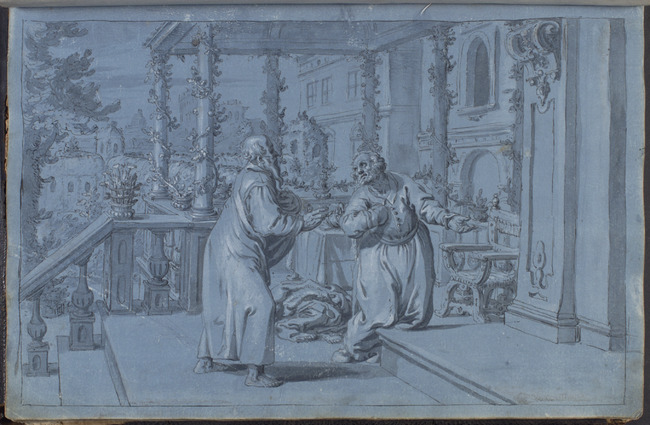 Through our contact with Ons' Lieve Heer op Solder in connection with the present investigation, two of the other anonymous sheets have become linked to a name. On the basis of the style of drawing and of its composition, Robert Schillemans, the museum’s curator, has convincingly attributed the Landscape with a Saint Anne Trinity and Mary with Christ, Saint John the Baptist and his Parents Elizabeth and Zacharias [12] to the painter Lambert Jacobsz. (c. 1598/1599-1636).2 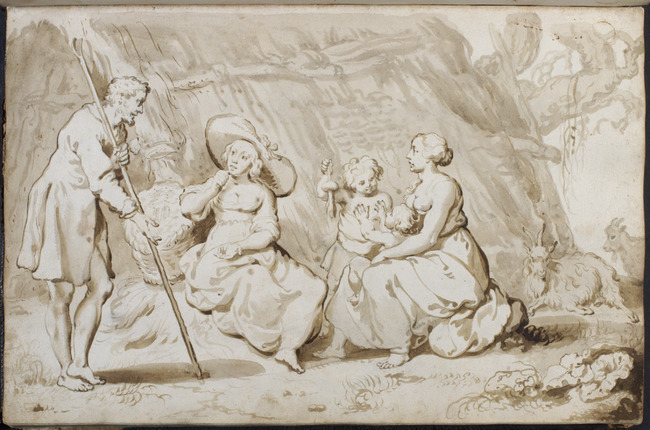 2 Written communication based on a photograph, September 2013.