The mentioned large financial loss of 1762 was not just an overture to Pott’s career switch. It also appears to have brought a temporary (?) halt to his activities as art collector.1 On 12 May 1762 an auction of his possessions took place in the Pott residence at 37 Poggenpfuhl (Żabi Kruk),2 located in the old city center of Danzig. Von Holst mentioned the auction in an appendix to an article of 1934,3 naming ten paintings that were part of the auction and giving the proceeds and purchaser for some of the works, which gives us greater insight into the group of active collectors in Danzig at the time. The mentioned works are the following:

Unfortunately it is not possible to identify the majority of these paintings because of a lack of concrete information. For the five so-called ‘altdeutsche’ works, for instance, the names of the artist and for the greater part also the subject matter are lacking.4 In view of the quotations marks, the painting of the goddess Diana given to a certain D. Schönfeld must have been deemed to be a debatable attribution. In addition, we know of no Schönfeldt with the initial ‘D’.5 Given the subject of the painting, it could have been a work by the German artist Heinrich Schönfeld (1609-1684), who rendered several versions of this theme during his stay in Rome and after his return from Italy.6 In his monograph on Joseph Heintz I, Zimmer included the painting with Diana as its subject among the lost works known only from the literature.7 According to Zimmer, it may well have been one of the numerous copies of the Diana and Actaeon by Joseph Heintz I in the Kunsthistorisches Museum in Vienna or else an engraving of the same subject after Joseph Heintz I by Egidius Sadeler II (1570-1629).8

Salomon Wegner
Von Holst identified the work by the local artistSalomon Wegner, a tronie or study of a head, as a painting from the collection of Jacob Kabrun jr [1] that is to have been in the collection of the Stadtmuseum in Danzig in 1934.9 Should this prove correct, the work must have been acquired by Kabrun at some later date, as he was not born until 1759 in Danzig, where he died in 1814.

Jusepe de Ribera
Spagnoletto, literally ‘small Spaniard,’ the name of the creator of the first two mentioned paintings, was the nickname of the Spanish Caravaggesque painter Jusepe de Ribera (1588/91-1652/56). The painting entitled Christ Teaching in the Temple (Christus lehrt im Tempel), without doubt a depiction of the 12-year-old Christ and the doctors in the temple, could well apply to three representations of this subject in Ribera’s oeuvre. Most important of these is what Papi believed to be a masterpiece by that artist of around 1612 to 1613 in the church of Saint-Martin in Langres (France).10 It could also be related to two compositions by Ribera known only in the form of various copies.11 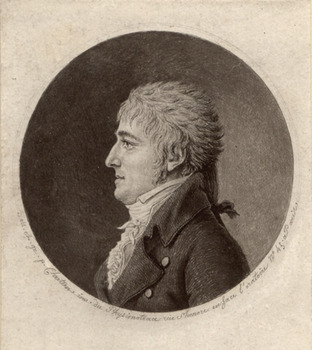 Of particular interest are Von Holst’s mentions of the proceeds, which at fl. 231 were considerable, and of the name of the new owner, Uphagen.12 The name of this buyer recurs with works of the second Pott auction of 1763 (see § 5.3), but then supplied with an initial ‘P’. This was probably Peter Uphagen (1704-1775) [2],13 a scion of an old family which belonged to the patriciate in the 18th century. The family originally came from Flanders, which they left around 1585 to avoid religious persecution.14 Peter Uphagen’s career corresponds along general lines with that of Peter Pott. He, too, was trained as a merchant and after having learned Polish for a year, took a journey through Europe to increase his knowledge and skills. He visited Germany, Holland, England and France in succession. After his return home he ran a shipyard together with one Wilhelm Jacob Paleske, an enterprise that was to survive for forty years. Lucrative contracts supplied him with large profits and allowed him to purchase several houses and to be active as an art collector. He also filled several public functions, such as dean, councilor and regent of sundry charitable institutions, including the hospitals of Saint Elisabeth, the Holy Ghost and the Reformed community.15 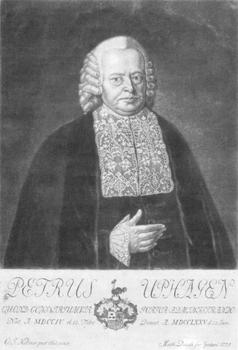 The second painting to be auctioned as a Ribera, a depiction of a lute-player, could be related to four paintings with this subject within his oeuvre, all copies after an unknown original or, less probably, to the original itself. On the basis of the inscription ‘AVDITVS’ on one of the copies, it is clear that it must concern a representation of ‘hearing’, one of the five senses.16 The proceeds from this work, fl. 61, and the name of the buyer, one Schumann, are again known.17

This was almost certainly Gabriel Schumann (1702-1764), an art collector mentioned by Von Holst. On 8 November 1764, shortly after Schumann’s death, his collection was auctioned in his residence at 116 Heilige-Geist-Gasse (Kobzdeja Pl./ Św. Ducha).18 The Schumann family belonged to the most important of Danzig, with marital ties to other dynasties of merchants and aldermen. The family originally lived in Konitz (Chojnice) until 1566, when Gabriel Schumann (1530/1531-1601) settled as merchant in Danzig.19 The Schumann family had supplied Konitz with multiple burgomasters and aldermen. Between 1566 and 1814, when the free city of Danzig was annexed by Prussia, no fewer than eleven members were active as aldermen, of which five also served as burgomaster. Gabriel himself also filled diverse high positions in the city government. In 1739 he was city secretary, in 1748 court clerk, in 1754 alderman, in 1758 judge and in 1761 treasurer.20 An inheritance and two fortunate marriages turned him into a rich man and allowed him to start an art collection that included sundry sculptures in boxwood and ivory as well as paintings by artists such as Bartholomäus Miltwitz (c. 1590-1656), Salomon Wegner and the mentioned Jusepe de Ribera.21

1 Pott cannot have been financially comfortable in the years after the 1763 bankruptcy. Even after he entered the service of the Seehandlungsgeschellschaft in 1772, he must at first have had limited financial elbow room. His salary at the time, 200 thalers monthly, was hardly sufficient to maintain his family. Some years later, as a consequence of his promotion, his financial position improved. With his leading position with the Elbing branch from 1777 he earned 700 thalers a month (Straubel 2012, p. 519, n. 1424 and p. 520).

3 Von Holst 1934, p. 68. The auction catalogue is not included in Lugt 1938-1987 or in Ketelsen/Von Stockhausen/Fredericksen 2002, although Von Holst’s article does appear in the bibliography. The catalogue also goes missing in Art Sales Catalogues Online (ASCO), the continuation of Lugt’s Répertoire. This may be because the name of the collector was not found in the catalogue, so that Von Holst could only reconstruct it by coupling the auction and address data in the catalogue to the names of the home owners in the so-called ‘Grundbuch’, which was located in the city archives of Danzig in 1934. In addition, Von Holst’s report that he made use of ‘Akten’, suggests that it was not a printed catalogue but a written manuscript.

4 Given that they were painted on both sides, the four paintings with subjects taken from Christ’s Passion were probably part of an altarpiece. In view of the gold background, the Ecce Homo was probably a work of the late 14th or 15th century.

5 The David Schönfeld mentioned in AKLONLINE was active only as a goldsmith.

6 No fewer than three paintings with this subject are found in the collection of the Städtische Kunstsammlungen Augsburg, inv. nos. 12144, L 767 and L 769 (Von Knorre/Krämer 1984, pp. 223-226). Another possible creator is one Jacob Schönfelt (1707/1709- after 25 March 1766). Because the latter was still alive at the time of the auction and painted mainly still-lives and allegorical depictions, this suggestion seems unlikely. See AKLONLINE, headword Schönfelt, Jacob.

9 Von Holst 1934, p. 63. It is not clear how Von Holst arrived at this identification. Nor does he offer supporting information in the form of a catalogue or inventory number.

11 Examples in: Vienna, Kunsthistorisches Museum, Glasgow, Corporation Art Gallery, Castres, Musée Goya, and Nantes, Musée des beaux-Arts (Pérez Sánchez/Spinosa 1978, pp. 128-129, cat. nos. 253-256). A mirror-image and partly divergent composition which according to Pérez Sanchez and Spinosa is based on an engraving after a prototype by Ribera, is located in Rome, Galleria Nazionale d’arte Antica, Palazzo Corsini (Pérez Sánchez/Spinosa 1978, p. 129, cat. no. 257).

13 It could conceivably concern Johann Uphagen (1731-1802), a son of Peter Uphagen, in part because in 1781, six years after the death of Peter in 1775, Johann bought a Judith with the Head of Holofernes by Lanfranco at the Wessel auction for fl. 102 (Von Holst 1934, p. 63). However, he was still fairly young in 1762, which makes it more probable that father Peter Uphagen was involved in this instance.

14 Barylewska-Szymańska/Szymański 2003, p. 53. The first Uphagen mentioned by these authors, who belonged to the branch with its residence on the Langgasse, the later Uphagen house, was Arnold Uphagen (1560-1623), who left Flanders around 1585 on account of religious persecution, the family being Protestant. Though not mentioned by the authors, there is a chance that this Arnold was related to Thomas Ophogen of Danzig, for whom Cornelis Ketel painted several works which, according to Karel van Mander, still hung in his residence in 1604. See elsewhere in the present article under Cornelis Ketel.

15 The biographical data for Peter Uphagen was taken from Barylewska-Szymańska/Szymański 2003. According to these authors, nothing more is known about his collections, making this the first proof of his activities in this field.

18 Von Holst 1934, p. 68. There are differing opinions about the exact dates of birth and death for Gabriel, baptized Gabriel Friedrich, Schumann, varying from 3 January 1702 to 3 or 5 June 1702 for his birth and 23 or 24 May 1764 for his death. See the ‘Stammtafel Schumann’, Familienblatt Schu-35/e, being a section of Die Danziger Ratsfamilie Schumann, no. 9, of the ‘Aufsätze über die ostpreusische Verwandtschaft’, a part of the highly elaborate website of Hans-Dietrich Lemmel, Das Lemmel-Archiv. See: http://geneal.lemmel.at/SchumannDanzig.html (consulted: September 2013).

19 The family’s progenitor was Michael Schumann, a knight of the Teutonic Order, who lived around the time of the battle of Tannenberg (Stębark) (15 July 1410) and who is to have descended from the Prussian ruler Skomand (c. 1225-c. 1285), a progenitor of the Prussian branch of the Sudauer. For information about the battle of Tannenberg, see http://nl.wikipedia.org/wiki/Slag_bij_Tannenberg_%281410%29 (consulted: September 2013). For Skomand see http://de.wikipedia.org/wiki/Skomand_von_Sudauen ( consulted: September 2013). Konitz (Chojnice) is a city located about 100 kilometers to the southwest of Gdańsk. Until 1917 it fell under West Prussia, but it is now a part of the Polish province Pomorskie (Pomerania).